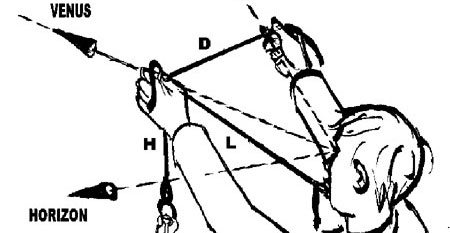 It is possible to see Venus with the unaided eye, not just before dawn or sunset but even at midday! The problem is in knowing when and where to look. In attempting to look for it myself I developed the following gadget, which is easily carried in the pocket and can be brought out and used – as long as there is no one around to certify you! It consists of a long piece of string which has a loop at one end to clench between the teeth and a simple overhand knot at the other which is to be held in the right hand and aligned with the Sun. This hand can therefore be used to shield the eye from direct sunlight. The left hand holds another simple overhand knot at distance D from the Sun knot and L from the loop. Through this knot is threaded a short length of string, the end of which is attached to a bunch of keys. This string can be pulled through the knot so that the keys are at a distance H below it. I should think you can see what it will do.

The first table gives the elongation east of Venus from the Sun and its altitude above the horizon in degrees.

The second table gives the same data in units if the strings from mouth to knot is divided into 16 units (this can be done by folding that part of the string 4 times and making marks with ink on the string).

One thing you will discover is that you have an awful lot of junk floating about in your aqueous humour – not quite old bedsteads or bikes but many sparks and cells which can pose as Venus. The other thing is that the eye has nothing to focus on except your hand, which is too near. Don’t squint. Position yourself so that your left hand is in line with a chimney, mast or a twig of a tree. Looking at that instead will help the eye to focus. It will also mark the position of Venus for anyone else if they stand in your place thus helping to dispel their opinion that you must be mad!

Check again and again. If you see it a number of times in the same place, you could consider yourself successful. The crescent will only be seen using a pair of 10×50 binoculars in September 2010.

BEWARE LOOKING AT THE SUN, ESPECIALLY WHEN USING BINOCULARS