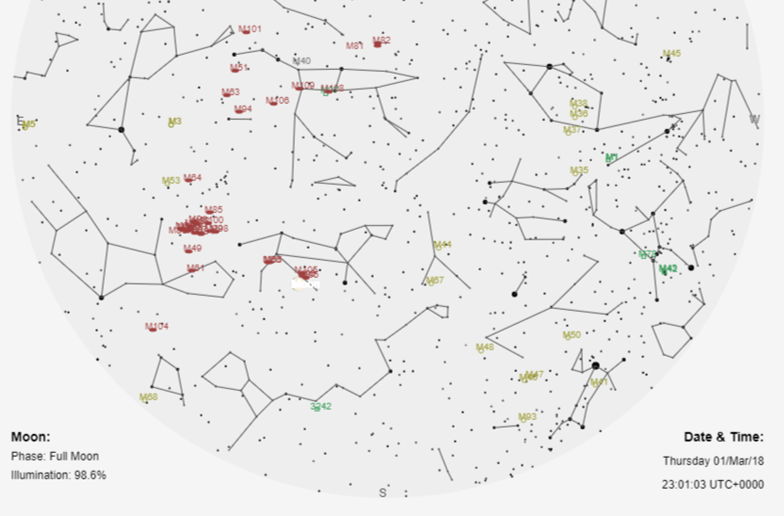 If it has been a quiet observing Winter for you, then March is the month to get out there and enjoy the night sky as we move into Spring. Try our new guide for the month.

March is a month that holds the Vernal Equinox where the Sun passes from the Southern to the Northern hemisphere and day and night are approximately of equal length. It actually happens a few days earlier for us on 18th March when the daytime is 12hrs and 1 minute long. Also remember this is Sun up to Sun down which isn’t our usual observing window. We normally wait until astronomical twilight is finished before staring up into the darkness. This is at 19:40 UTC at the start of the month and 20:38 UTC (21:38 BST) by the end. The same nibbling occurs at dawn, so this month we’ll be losing 2 hours of darkness. Need any more reasons to get out and observe?

The current solar minimum is not throwing up any surprises with sunspot activity close to zero. Those with personal solar telescopes may be able to catch the occasional solar prominence on a limb but other than that it is quiet. Instead you may wish to try to replicate the work of Eratosthenes in calculating the circumference of the Earth. Simply get on an Easyjet flight to somewhere a known distance x from the Equator on 20th March and measure the altitude of the Sun at midday. A simple bit of trigonometry and you can advise any Flat-Earther friends of your discovery. If you calculate 40,000 km then you’re doing better than Eratosthenes.

Despite the shortening periods of darkness, with Leo and Virgo constellations coming into view a host of deep sky objects become accessible. This is why March is the traditional month to attempt the Messier Marathon; spending one night to try to spot as many objects from the Messier list of 110 deep sky objects such as open clusters, nebulae, globular clusters and galaxies. With the New Moon, the best attempt this month will be on or around 17th March. You can use specially ordered lists designed for UK observers which relist the Messier objects in the order that they accessible in the night; this increases you likelihood of observing the maximum possible in an evening.

March boasts two full Moons this month on 2nd and 31st and so thin crescents are visible around the 14th and 20th of the month. The 1 day old crescent should be visible at Sunset on 18th March close to Venus and Mercury creating a nice triplet for imagers. Mercury is actually at its best 3 days earlier on 15th March at its greatest eastern elongation (widest separation between the planet and the Sun as seen from the Earth). It is 18 degrees from the Sun and can be seen shortly after sunset. Venus is currently similarly positioned and brighter making it a good tool for locating the fainter Mercury. If you are interested in the closet these two planets get then you want to be looking on the evening of 4th March; the separation is a little over a degree and Venus and Mercury are magnitudes -3.8 and -1.1 respectively.

Uranus is being caught by the Sun and opportunities to see her are diminishing as the weeks go on. It is around magnitude +5.9 and is just 14 arcminutes from Venus on 28th March but better seen earlier in the month. Neptune is lost to the Sun.

Jupiter, Saturn and Mars are all well positioned in the morning sky this month from and visible from 04:00 in the SE to S. Due to the improving rising times, they are better observed at the end of the month.