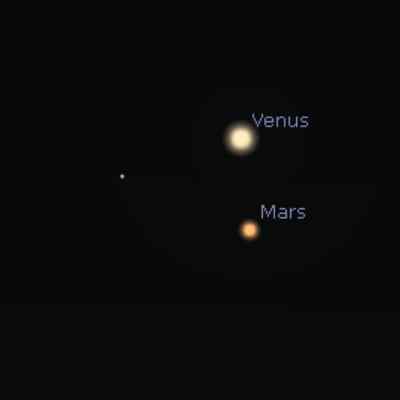 October is a good month for observing planets and you should be able to view 5 with binoculars or a small telescope. Just Mercury and Jupiter reaching conjunction on 9th and 26th respectively are hidden by the Sun. Get up early on Thursday 5th October if the weather is fine to see Mars and Venus separated by half a Moon’s width. They rise in the East at 05:00 BST and climb to about 15° above the horizon by 06:30 before the rising Sun starts to drown out Mars. You’ll need a good clear horizon to appreciate it fully but well worth taking the stroll. The separation is just 12 minutes and so photographers might like to plan some good foreground subject to fill the frame well.

Neptune has just passed opposition and Uranus does so on 19th October. This means both are good for observing this month. Uranus is magnitude 6 and dimming slowly through the month in Pisces. Neptune on the other hand is 8.4 magnitude, in Aquarius and getting brighter as the month passes.

Saturn is getting closer to the Sun and will be setting only two hours after by the end of the month. Try to get a final look at it before it lost over the next few months. It’s rings are at their widest presently so a good opportunity to see the Cassini Division.

The Moon is full on 5th and New on 19th October and so weekends of the 14th and 21st October are best placed for observing fainter objects. As it wanes on 17th to a thinning crescent it’ll be a few degrees from Mars in the morning skies with Venus perhaps 10° away too. Try from 06:00 BST with a good easterly horizon.

If you have an 8″ scope or greater, try getting a look at the comet C/2017 O1 ASASSN which is moving up from Perseus into Camelopardis as the month progresses. It is slowly brightening from magnitude 14.3 but is due to fade from mid October.

The Orionid meteor shower is due to peak on 20th October with a potential zenithal hourly rate (ideal) of 15 to 20. It is best viewed after midnight like most showers and as the radiant doesn’t rise until 23:00 early viewing shouldn’t be too rewarding. The radiant is in the arm of Orion just above Betelgeuse. The source of the Orionids is Comet Halley on its 76 year journey around the Solar System. Other October showers peaking are:

The Draconids are caused by debris from 21P/ Giacobini-Zinner and it’s 6.6 year orbit. The last time the shower exceeded expectations was back in 2011 with 600 per hour but don’t hold out too much hope, as before that you’d need to go back to 1933 and 1946 for excellent shows (1000+ per hour). Having advised above a post midnight strategy for meteors, the Draconids are the opposite. Observe from Sun down and probably give it until the waning Moon rises and washes out the dimmer streaks.