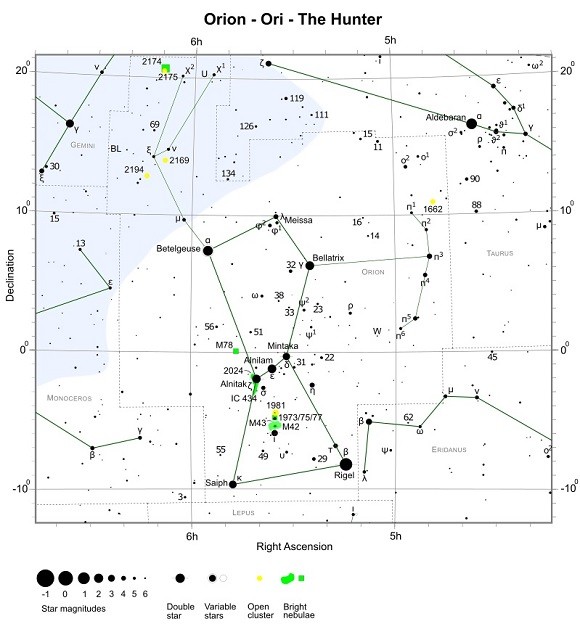 December is such a busy month that we can hardly fit it all in; shopping, entertaining, present wrapping, parties and normal life/paying the bills. Why not make sure you spare a bit of time to relax and look up? The skies are dark and, with a few cold snaps, will give us clear crisp views of the heavens above.

In anticipation of this two public observing sessions have been arranged on 9th and 16th December at Wellow. Fingers crossed on the weather.

The Winter constellations are with us now and the sight of Orion in the South let’s us know Christmas is on its way almost as reliably as the jingles on radio and television. Grab a pair of binoculars and ensure you have a look at the Pleiades open star cluster M45 in Taurus, and the Orion Nebula M42 visible as a glowing patch in the sword hanging from Orion’s belt. Almost overhead this time of year is the Andromeda Galaxy M31 accompanied by M32 and M110 if you have a telescope handy. Drop further South and you’ll get to see the Triangulum Galaxy M33 in the telescope too. Back up to Taurus and the Crab Nebula M1 is dim ghost too in moderate telescopes. The darker skies mean that previously elusive nebulae should start popping out so worth getting out the star charts and having a look.

It is good month for early risers as the meteor shower to watch out for is on the morning of 14th December. It peaks for UK observers before dawn although the real peak will be enjoyed further west i.e. USA. The shower builds up from early December and the maximum zenithal hourly rate would be 100 meteors. The Moon is in a favourable position to watch the slow build up from each day up to 14th. The radiant sits within Gemini close to Castor.

Whilst looking for Geminids in the early hours, you can also capture Jupiter a couple of hours before Sunrise. A telescope and a little magnification will show the moons and the atmospheric banding on the planet. Due to the Earth’s tilt with respect to that of the Sun and planets, Jupiter appears low in the sky and will be subject to to image problems from looking at objects through so much of Earth’s atmosphere. Great to observe but more difficult to take pictures of. Watch over a few mornings or each 30 minutes to get an impression of the moons orbitting the planet.

Mars will be there as well. A bit far away at present and again the Earth’s tilt mean it is a small disk and low in the sky; it is still worth having a look at. A good preparation for next Summer as the angles improve and it will become the ‘star’ of the show.

On 2nd December, Mars will join Jupiter and Venus to make a pleasing grouping in the morning sky before Sunrise. Later on 14th, Mars and Jupiter can be seen with the crescent Moon. If you plan to photograph these, plan ahead and locate yourself where you can get some interesting objects in the foreground that you can fit in with a telephoto/telescope low power, otherwise the planets can appear washed out in a glow. By 31st December, Mercury will be visible in the morning skies too.

Uranus makes good viewing in Pisces this month and can be found as per the diagram.

Neptune at magnitude 7.9 is a challenge in Aquarius this month and can be found as per the diagram.

The Moon is Full on 3rd December and New on 18th. This means that the Ursid meteor shower has a chance of being seen on 22nd and 23rd December. It is a low ZHR shower with up to 10 but as the radiant is in Ursa Minor it is quite easy to track back trails to confirm their origin and it is higher in the sky. Perhaps one to get the reclining garden furniture out for?

Comet ASSASN 2017 O1 has peaked and is now fading from a peak around magnitude 9 to 12+ now. It is worth taking a snap if you have a larger aperture telescope and if you space more shots over a couple of hours, you’ll see its movement clearly.