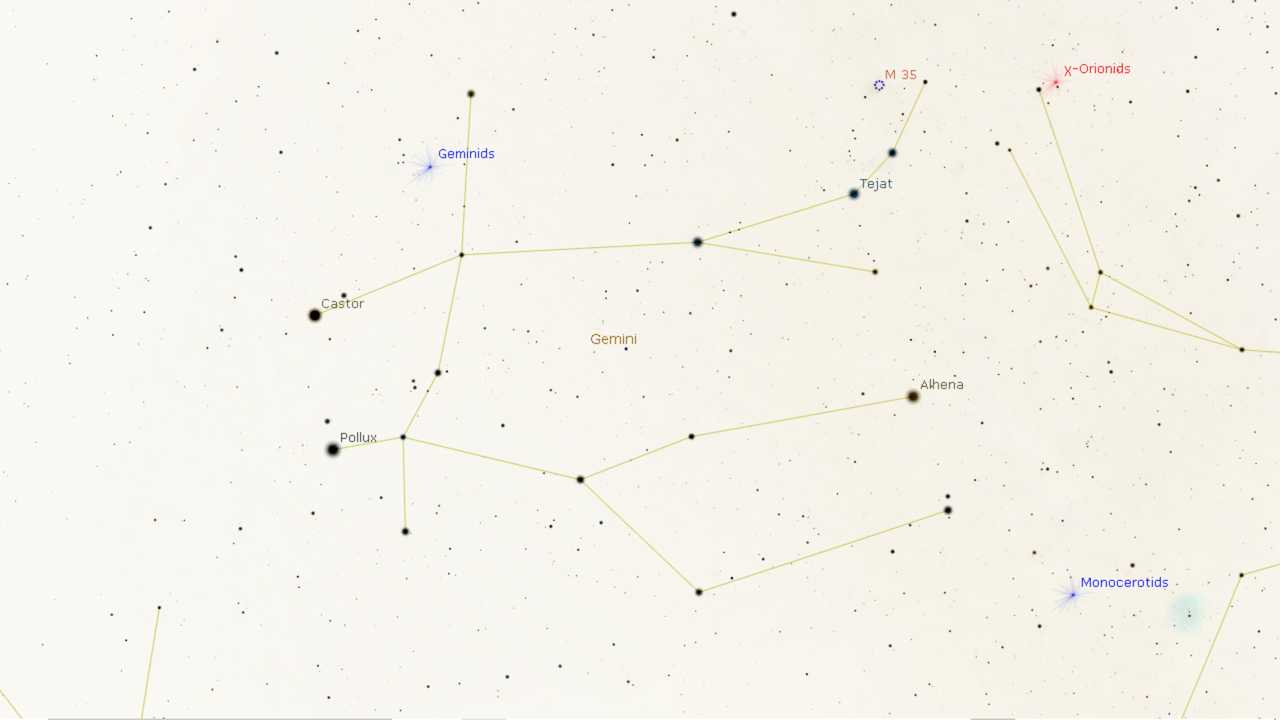 Received from the BAA:

A GREAT YEAR FOR THE GEMINIDS!

Active from December 6-17, but with a slow rise to maximum, the Geminids are currently the richest of the regular annual meteor showers, producing an abundance of bright meteors, with rates outstripping those of the August Perseids for a 24-hour interval centred on their 14 December maximum – a real treat for observers prepared to brave the early winter winds, cold and damp.

The other good news is that Geminid maximum this year occurs just before new Moon, so there will be no interference by moonlight, enabling many fainter meteors to be seen in addition to the brightest members of the shower.  This year, the time of Geminid maximum is especially favourable for observers in Europe, with peak activity expected at about 02h on Thursday, December 14, when the ZHR may again reach 100 to 120 meteors per hour.

Observers should also note the most interesting project being organised by Dr Tony Cook of the BAA Lunar Section to capture video of lunar impact flashes as Geminid meteoroids strike the lunar surface on the eastern night side. See the BAA website for further details.

In recent years, from the UK, the Geminids have shown typical peak observed rates of 70-80 meteors per hour in good skies, so this is what one might expect on the peak night of December 13/14 (Wednesday night/Thursday morning). The maximum is quite broad, however, and respectable Geminid rates may be expected throughout the nights of December 12/13, 13/14 and 14/15.

Past observations have shown that bright Geminids become more numerous some hours after the rates have peaked, a consequence of particle-sorting in the meteoroid stream.

The Geminid shower radiant (at RA 07h 33m,  Dec +32o, just north of the first magnitude star Castor) rises early in the evening and reaches a respectable elevation above the horizon (> 40o) well before midnight, so observers who are unable to stay up late can still contribute very useful watches. However, the early morning hours of Thursday, 14th December are likely to see the greatest Geminid activity, when the radiant is high in the sky.

As with any meteor shower, when observing the Geminids it is best to look at an altitude of 50o (about the same altitude as the Pole Star from southern parts of the UK) and 40-50o to either side of shower radiant, rather than looking directly at the radiant itself, although Geminid meteors may appear in any part of the sky. December nights can be quite chilly, especially in the early morning hours, so wrap up well with plenty of layers of warm, dry clothing and make sure that you wear a hat, gloves, thick socks and sensible waterproof footwear.

Geminid meteors enter the atmosphere at a relatively slow 35 kilometres per second, and thanks to their robust (presumably more rocky than dusty) nature tend to last longer than most in luminous flight. Unlike swift Perseid or Orionid meteors, which last only a couple of tenths of a second, Geminids may be visible for a second or longer, sometimes appearing to fragment into a train of ‘blobs’. Their low speed and abundance of bright events makes the Geminids a prime target for imaging.

The Geminid shower has grown in intensity over the past 50 years as a result of the stream orbit being dragged gradually outwards across that of the Earth. A consequence is that we currently encounter the most densely-populated parts of the stream. This happy situation is unfortunately only temporary – in a few more decades, Geminid displays can be expected to diminish in intensity. Here we have an excellent opportunity to follow, year on year, the evolution of a meteoroid stream.