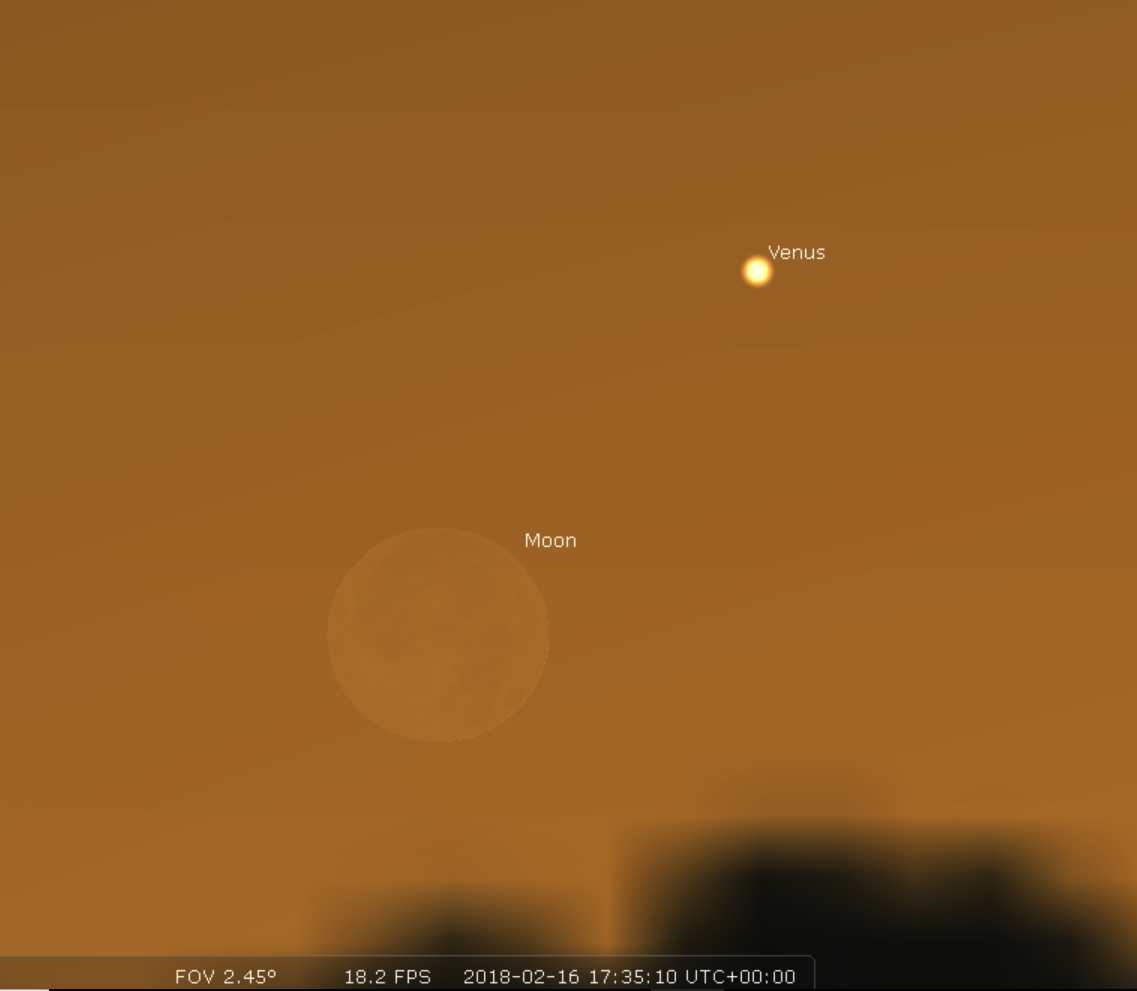 So with January saying goodbye with a Super Blue Moon hoorah, you have to ask what can short February hope to offer? Well there’s no Full Moon in the month with New Moon on 15th Feb making the latter half of the month a good time to practice finding Messier and other deep sky objects before the Messier Marathon in March.

There is a partial Solar Eclipse on 15th February but you’d need to be in Chile or Argentina to enjoy it.

The New Moon does give an opportunity for thin crescent hunters as the normally very elusive first signs of the 1 day old Moon is a sliver of a crescent just after Sunset; very hard to see in the diminishing glare and you need to be very careful with any optical instrument if any hint of the Sun is above/at the horizon. This February however, the planet Venus will be just above the young Moon and provide a great marker. So look WSW at 17:00 on 16th Feb. You’ll need a nice low horizon in that direction as the Moon is just 8° above the plane of the horizon. Looking through this much atmosphere and so close to the Sun, this won’t probably be a pin sharp photo opportunity but if you find a church spire or a great shaped tree foreground, you could come home with a memorable picture perhaps for the 2019 calendar.

Bright star occultations by the Moon aren’t so rare but give you a good opportunity to check the timing of astronomical events or create a montage of shots. More rare are the edge grazers where the starlight flickers behind Lunar mountain ranges giving you an accurate profile of the Lunar surface; once reason for rarity is that you have to be on a certain line on the Earth to see the event.  On 23rd Feb Aldebaran will approach the First Quarter Moon and at 16:30 or so, it will be occulted by the dark limb. It will pop out the bright edge of the Moon at around 17:30. A simple off-on but a good opportunity for those that want to find a star in day time without the use of a calibrated Goto mount.

The Inner Solar System gives us Mars visible in the mornings and Venus as an evening star slowly moving away from the Sun at Sunset each evening. Both are improving throughout the month. Mars rises by 03:30 each morning in Scorpio and will pass within the wide angle field of view of Antares during the month offering a nice planetary and stellar comparison of their very similar colours. The closest is in the middle of the month. Venus sets about 45 minutes after Sunset and is magnitude -3 so quite easy to see as long as you have a reasonable horizon. Mercury is presently very close to the Sun and so is effectively not visible.

The Outer Solar System objects are as always led by Jupiter but you’ll need to be an early bird as it rises around 01:30 to 02:00 each morning. The Galilean moons are very visible and this month there are three bright transit events, all involving Ganymede. On 10th the moon will pass infront of the body of the planet where it can be a little tricky to distinguish. It commences around 1:55 so for Bath it is still on the horizon. More visible will be when it moves off the disc around 03:15. On 17th and 24th, the shadow of Ganymede will pass across Jupiter’s disc giving much more contrast than the moon by itself. On the 17th the shadow will be on Jupiter as it rises and will have completed the transit by 02:30. The 24th is more favourable starting around 04:45 and completing by 06:30. Saturn sits between Jupiter and the Sun and rises a couple of hours before Sunrise. 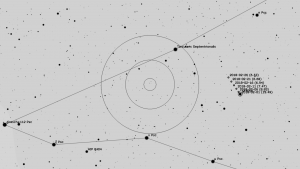 Uranus slowly moves through Pisces covering a deg or so. It is magnitude 5.9 and visible through binoculars and telescopes showing a small bluish disc in the latter. As the Sun marches around the ecliptic, it’ll catch up with Uranus and so, although no hurry, it is technically better to view earlier in the month.

Neptune will be in conjunction with Venus on 21st at Sunset with the objects 32″ arcmins apart. The glare will obliterate magnitude 8 Neptune. It is interesting to consider that the 12 magnitudes they differ by is a factor of 60,000 in brightness.

There are no notable Meteor Showers this month and even the comets are putting on a poor show. The best at present is probably PanSTARRS 2016 R2 with a brightness of magnitude 11.5 making it a camera object only.